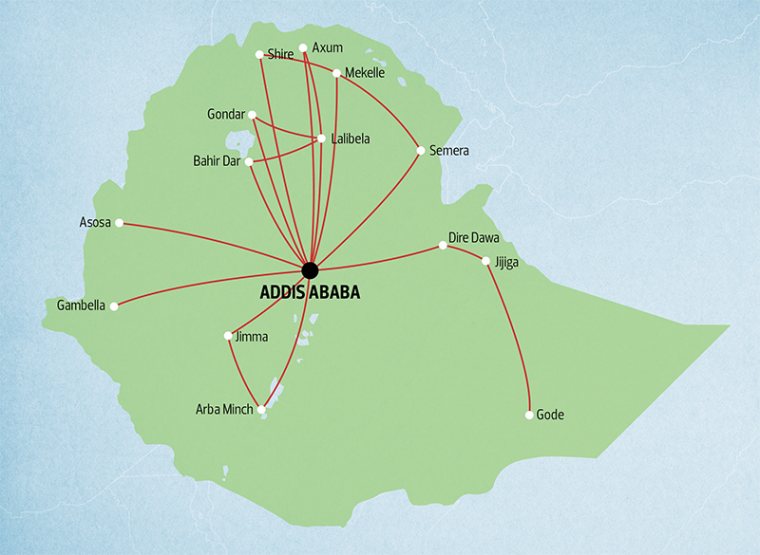 If your time in Ethiopia is limited, flying is the most eﬂicient way to get around. Even travelers who would not normally do so might think about using a couple of flights in Ethiopia. For starters, the full spectacle of Ethiopia’s landscape is best seen from the air (the leg between Gondar and Lalibela is particularly recommended). You could also save a lot of time by ﬂying out to a far-ﬂung destination - for instance Axum, Arba Minch or Gambella — and working your way back overland, rather than repeating a similar bus trip out and back. Ethiopian Airlines runs a good network of domestic ﬂights connecting Addis Ababa to most major tourist destinations. The best connections are in the north, where at least one ﬂight daily goes in either direction between any combination of Addis Ababa, Bahir Dar, Gondar,  Mekele, Lalibela and Axum (Historic Route Service) . There are also ﬂights to 14 other places of the country, such as Arba Minch, Assosa, Bale Robe, Dire Dawa, Gambella, Gode, Humera, Jijiga, Jimma, Kabri Dar, Kombolcha, Mekele, Semera, Shire, and Shilavo.

The domestic ﬂights are generally efficient and they normally leave on schedule, but last-minute schedule changes are commonplace and you can probably expect on average one serious hold-up when you ﬂy around the historical circuit. The soundest advice we can give in this regard is always to allow one non-travel day between ﬂights, which eliminates the possibility of missing something important. Check Ethiopian Airlines website for latest information.

Ethiopian road transport compares well with that in many other places. In the past few years, the main highways connecting the Capital Addis to most of the major regional cities are covered with Asphalt road and driving comfort improved significantly.  The only real problem with road transportation is the size of the country. The northern historic route, for instance, requires more than 2500km of road travel – and at an average driving speed of 80km/hr, you spend 32 hours on the road (4 - 5 days travel by bus).

Road conditions in Ethiopia are extremely variable, which makes it difﬁcult to predict driving times based purely on the distance involved. There are some stretches of asphalt roads so good that you could cover l00km in an hour without undue risk, while at the other extreme are rutted dirt tracks where it would be difficult to achieve an average driving speed of 20km/hr, and impossible to drive after heavy rain.

On some runs, buses leave through out the morning; on other runs, buses leave at a speciﬁc time, which is typically a boarding time of 05:30AM or 06:00AM local time. In some cases, you may be required to buy a ticket the day before departure, but you will still be told to be at the bus station at 05:30AM, and there’s very little chance of anything rolling before 07:00 but it can happen.

Light vehicles such as minibuses are widely available for short distance travel destinations. It is also possible to town-hop on light vehicles on some major routes (between Axum, Adigrat and Mekele; Addis Ababa and Adama; and Mojo and Hawassa). The other situation where light vehicles come into play is on routes where there are no buses, for instance between Goba and Negele Borena or Arba Minch and Jinka. Generally, these light vehicles are privately owned, are more crowded than buses, and fares are higher.

Buses are cheap, typically costs at around US $3 - 4 per 100km, though road conditions and travel time will also affect the fare. If you use light vehicles on routes where there are no buses, expect to pay considerably more than you would for a comparable distance on a bus route.

By Taxi, Bajaj and Gari

Taxis can be found in many larger towns. Except in Addis and towns with a high tourist turnover (for instance Gondar), they are very cheap but foreigners are frequently asked higher prices and you should expect to bargain. Taxis in Addis are relatively expensive compared to other cities and often drivers will refuse to drop their prices for foreigners. In towns with a cool climate, the horse-drawn cart or gari replaces taxis. These are even cheaper than taxis and very useful for reaching places a few kilometres out of town. Growing in number, however, outside of the capital, bajaj - small three-wheeled tuk-tuks imported from India - have replaced taxis in many of the country's ﬂatter regional towns such as Bahir Dar, Gondar, Harar and Hawassa as the main means of local transportation.

By Car and Car Hire

It is straight forward enough to hire a vehicle in Addis Ababa, but as a rule, a driver will be supplied so in essence you are really organising a tailored tour or safari. Car hire in Ethiopia is expensive by any standards and your negotiation skill determines how much you will end up to pay. Check from more than one place to get a reasonable price.

Avis is represented in Ethiopia by Galaxy Express, but most other operators in Addis Ababa can arrange car hire. If you are thinking of driving yourself, be warned that Ethiopian roads are not what you are used to. Many Ethiopian roads are in poor condition, and the pedestrians and livestock share the road.