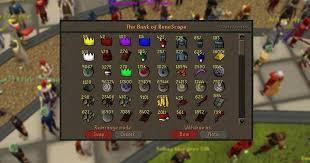 One of the best things Jagex can do would be to eliminate most of the teleports in the sport, or make them quite a bit harder to use beyond fundamental hub teleportation. Adding so many teleports has made the entire world map look far, far smaller. Secondly, it would do well to RS gold significantly increase the dimensions of almost everything. The more wild lands there may be, the further we'd feel immersed in the dream world where we're the adventurers who travel from the peak of civilisation into the interiors of badlands.

Inevitably, with a properly large draw distance the size of the map will be obvious. A few important modifications jagex could make to relieve that: Reshape mountain ranges. Making these feel more realistic and making rivers and so forth flow well from them could be massive in creating the map more plausible. Make the forests enormous. Truly, much bigger. This includes swamps etc.. Making them bigger the farther from civilisation we go would make those areas feel considerably more wild.

Insert more threat into the interior of these forests. Most of the map reflects a universe which is logical to get a mid to low level participant, to whom dragon would be an unusual material to see and Barrows armour really infrequent. The most dangerous areas just aren't dangerous. Literally adding boss monsters to the centers of these forests would significantly increase their threat. However, that's only possible if these areas are big enough which you can go around them if you know where you're. Make the in-game universe map less precise. If you could make it so that players had to research every area before it had been completely documented in the map that would make a large difference to the adventuring feel. New lands would really be alien.

Have fewer artificial barriers. That's a huge immersion breaker. If cliffs were tight but required some time and gear, if boundaries were not literally wooden fences we might jump , if rivers were not literal walls but instead obstacles that could be drifted more than if you had the ideal gear, that would be fantastic.

There's creatures, but nothing to bind you to the fights, there is training areas, but no grounds to use them. You don't get lost in the dream of the landscaping since there's nothing to get lost in apart from aesthetics, and you are just twiddling your thumbs waiting for to another port of call, which, can go partially hand in hand with your proposal of raising the problem, but it will require more than that. Very very good point. Jagex has completed a few things to adress this, but it doesn't really work for veteran gamers. I went to Karamja to quest, same as I went into the desert and Morytania. That is the major reason to buy rsgp paypal go to those areas, but the problem is that after you're done there, you're done.