Mapped: The Ins and Outs of Remittance Flows

The global immigrant population is growing at a robust pace, and their aggregate force is one to be reckoned with. In 2019, migrants collectively sent $550.5 billion in money back to their home countries—money transfer flows that are also known as remittances.

Remittances serve as an economic lifeline around the world, particularly for low- and middle-income countries (LMICs). Today’s visualization relies on the latest data from the World Bank to create a snapshot of these global remittance flows.

Where do most of these remittances come from, and which countries are the biggest recipients?

Remittances are a type of capital flow, with significant impacts on the places they wind up. These money transfers have surpassed official aid being sent to LMICs for decades, and in this day and age, are rivaling even Foreign Direct Investment (FDI) flows.

Remittance flows mainly help improve basic living standards such as housing, healthcare, and education, with leftover funds going towards other parts of the economy. They can also be a means for increasing the social mobility of family and friends back home.

Altogether, 50% of remittances are sent in either U.S. dollars, or the closely-linked currencies of Gulf Cooperation Council (GCC) countries, such as the Saudi riyal. It’s not surprising then, that the U.S. is the biggest origin country of remittances, contributing $68.5 billion in 2018—more than double that of the next-highest country, Saudi Arabia, at $33.6 billion.

Remittance Flows As A Safety Net

The impact of remittances on LMICs can vary depending on what you measure. In absolute terms, the top 10 LMIC recipients received $350 billion, or nearly 64% of total remittances in 2019.

India tops the chart as the largest remittances beneficiary, followed by China and Mexico. Interestingly, these three countries are also the main destinations of remittance flows from the U.S., but in the reverse order. Mexico and the U.S. have one of the most interconnected remittance corridors in the world.

However, the chart above makes it clear that simply counting the dollars is only one part of the picture. Despite these multi-billion dollar numbers, remittances are equal to only a fraction of these economies.

By looking at remittances as a percentage of nominal GDP, it’s clear that they can have an outsize impact on nations, even if the overall value of flows are much lower in comparison.

It’s clear that the cash influxes provided by remittances are crucial to many smaller countries. Take the Polynesian archipelago of Tonga, for example: even though it only saw $190 million in remittances from abroad, that amount accounts for nearly 40% of the country’s nominal GDP.

Remittance flows to low- and middle-income countries (LMICs) are expected to reach $551 billion in 2019, up by 4.7 percent compared to 2018. Remittances have exceeded official aid – by a factor of three – since the mid-1990s. This year, they are on track to overtake foreign direct investment (FDI) flows to LMICs.

Table: Estimates and Projections of Remittance Flows to Low- and Middle-Income Regions 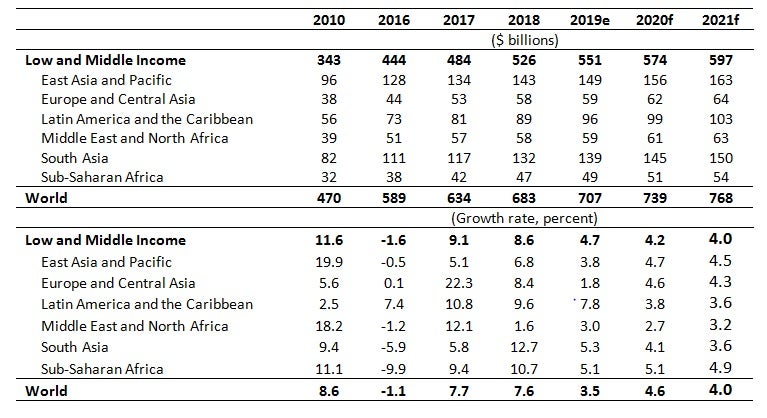 Sources of remittance flows to LMICs by currency

Remittances outflows from some major sending countries other than the US have been impacted due to the depreciation of their currencies against the US dollar. For example, the euro depreciated by 8 percent and the ruble by 16 percent against the US dollar, as of the first quarter of 2019. As a result, even as outward remittances in Germany and Russia increased in local currency terms, they declined in US dollar terms.

How Much Does It Cost to Send Remittance?

According to the World Bank’s Remittance Prices Worldwide Database, the average cost of sending $200 to LMICs was 6.8 percent in the second quarter of 2019, only slightly below previous quarters. This is more than double the Sustainable Development Goal (SDG) target of 3 percent by 2030 (SDG target 10.c). The cost was the lowest in South Asia, at around 5 percent, while Sub-Saharan Africa continued to have the highest average cost, at about 9 percent. Remittance costs across many African corridors and small islands in the Pacific remain above 10 percent. Note that intra-regional migration in Africa is over two-thirds of all international migration from Africa – past studies have pointed out very high costs for sending money within Africa (Leveraging Migration for Africa, World Bank, 2011), although no recent data are available presently on such South-South remittance costs.

Banks are the costliest channel for sending remittances, with an average cost of 10.3 percent in 2019 Q2, while post offices are lowest at 5.7 percent. Also, in an apparent example of policy incoherence, remittance costs tend to include a premium, a cost mark-up, when national post offices have exclusive partnership arrangements with a dominant money transfer operator (MTO). Such premia average 2.3 percent of the cost of transferring remittances worldwide and are as high as 4.6 percent in the case of India, the largest recipient of remittances.

Figure: Average Costs of Remittances by Type of Provider, 2019 Q2