The 20 Internet Giants That Rule the Web 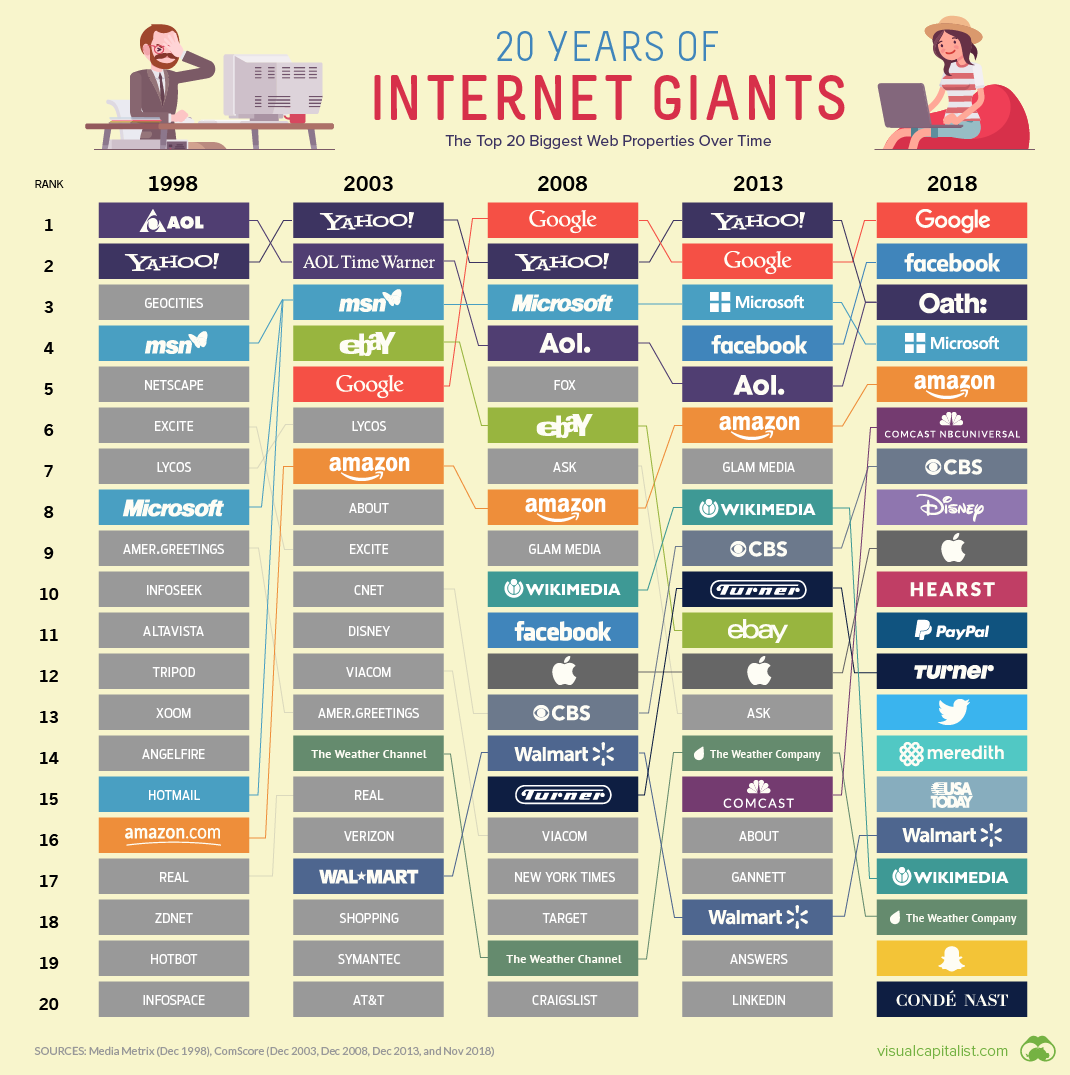 With each passing year, an increasingly large segment of the population no longer remembers images loading a single pixel row at a time, the earsplitting sound of a 56k modem, or the domination of web portals.

Many of the top websites in 1998 were basically news aggregators or search portals, which are easy concepts to understand. Today, brand touch-points are often spread out between devices (e.g. mobile apps vs. desktop site) and a myriad of services and sub-brands (e.g. Facebook’s constellation of apps). As a result, the world’s biggest websites are complex, interconnected web properties.

Today’s visualization, inspired by an earlier work published by WaPo, looks at which of the internet giants have evolved to stay on top, and which have faded into internet lore.

For millions of curious people the late ’90s, the iconic AOL compact disc was the key that opened the door to the World Wide Web. At its peak, an estimated 35 million people accessed the internet using AOL.

By 1999, the AOL rode the Dot-com bubble to dizzying heights, with a valuation of $222 billion dollars.

AOL’s brand may not carry the caché it once did, but the brand never completely faded into obscurity. The company continually evolved, finally merging with Yahoo after Verizon acquired both of the legendary online brands. Verizon has high hopes for the company – called Oath – to evolve into a “third option” for advertisers and users who are fed up with Google and Facebook.

A City of Gifs and Web Logs

As internet usage began to reach critical mass, web hosts such as AngelFire and GeoCities made it easy for people to create a new home on the Web.

GeoCities, in particular, made a huge impact on the early internet, hosting millions of websites and giving people a way to actually participate in creating online content. If the web host was a physical place, it would’ve been the third largest city in America, just after Los Angeles.

This early online community was at risk of being erased permanently when GeoCities was finally shuttered by Yahoo in 2009, but the nonprofit Internet Archive took special efforts to create a thorough record of GeoCities-hosted pages.

From A to Z

In December of 1998, long before Amazon became the well-oiled retail machine we know today, the company was in the midst of a massive holiday season crunch.

In the real world, employees were pulling long hours and even sleeping in cars to keep the goods flowing, while online, Amazon.com had become one of the biggest sites on the internet as people began to get comfortable with the idea of purchasing goods online. Demand surged as the company began to expand their offering beyond books.

Meredith – with the possible exception of Oath – may be the most unrecognizable name to many people looking at today’s top 20 list. While Meredith may not be a household name, the company controls many of the country’s most popular magazine brands (People, Sports Illustrated, Health, etc.) including their sizable digital footprints. The company also has a slew of local television networks around the United States.

After its acquisition of Time Inc. in 2017, Meredith became the largest magazine publisher in the world.

When people have burning questions, they increasingly turn to the internet for answers, but the diversity of sources for those answers is shrinking.

Even as recently as 2013, we can see that About.com, Ask.com, and Answers.com were still among the biggest websites in America. Today though, Google appears to have cemented its status as a universal wellspring of answers.

As smart speakers and voice assistants continue penetrate the market and influence search behavior, Google is unlikely to face any near-term competition from any company not already in the top 20 list.

New Kids on the Block

Social media has long since outgrown its fad stage and is now a common digital thread connecting people across the world. While Facebook rapidly jumped into the top 20 by 2007, other social media infused brands took longer to grow into internet giants.

In 2018, Twitter, Snapchat, and Facebook’s umbrella of platforms were are all in the top 20, with LinkedIn and Pinterest not far behind.