Today forced to speak about the Barcelona marathon. One of the athletics events that has struggled the most in recent years to position itself among the most important athletics events in Europe. With the pull of the European that was held a few months ago in Barcelona, ​​a large influx of public was expected , and so it has been, achieving a record participation, the 15,075 athletes . A figure not enviable.

Among the participants, it is worth noting that the first "native" to reach the finish line was ninth, the top positions have been contested by foreign athletes, who, called by the test, have been an important bulk of the total, and who have stood out with incredible physical capacity. The kiniata Levi Matebo has been the winner of this edition , with a time of 2h07'31 »only one second above the record that the marathon had, which gives proof of the tightness and competitiveness of this marathon. In the feminine section, Josephine Ambjörnsson, with a time of 2h45'31 'has managed to be the first woman , with a time not enviable either, the first "native" has come in fifth position. 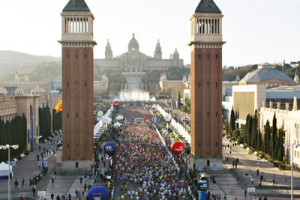 The Marató de Barcelona is already the seventh largest in Europe , and it is not a reason for pride, since in five years it has doubled the number of participants. In addition, the test was for a couple of years about to disappear, among other reasons for financial problems of the organization. Therefore, the double reason for pride in the impressive media and participant results it has had, since although we highlight the professional winners, there have been many, most of them, amateurs who have filled the city of Barcelona with color.

In addition, the numbers speak for themselves, 43% of the participants have been foreigners , with a special presence of French and Italians, which internationalizes the test even more throughout Europe. Something, which was undoubtedly one of the objectives for this year of the Marató.