Addis Ababa was founded in 1886, when Emperor Menelik II's consort, Queen Taytu, asked her husband for a piece of land on which to build a house at the foothills of the Entoto mountains, where Menelik had his camp. The fertile area was the site of hot springs, to which the queen and many of the courtiers spent much of their time travelling. Menelik agreed.

In the same year Queen Taytu gave the settlement its name: Addis Ababa, literally meaning 'New Flower' in Amharic. For several years Menelik and his counties divided their time between Entoto and the new settlement, but by around 1891 Addis Ababa had definitely become the more important of the two, emerging as the unquestioned capital of the realm.

Dominated by the 3,000-metre (9,840-foot) high Entoto mountains immediately to the north, Addis Ababa is Ethiopia's largest city. Covering 250 square kilometres (97 square miles), the city rambles pleasantly across many wooded hillsides and gullies cut through with fast-flowing streams. Despite its proximity to the Equator, its lofty altitude - the third-highest capital in the world - means that it enjoys a mild, Afro-alpine climate.

From its inception Addis Ababa was clustered around two main centres: the palace to the east and the market, with Saint George's Church, to the west. Together they generated so much activity that the capital grew and developed rapidly.

By the late 1950s Addis Ababa was recognized as the unofficial capital of Africa, and thus was made the headquarters of the United Nations Economic Commission for Africa (ECA) in 1958 and later, in 1963, chosen as headquarters of the Organization of African Unity (OAU).

Today Addis Ababa, which bears the imprint of many of these past developments, is a major metropolis, with an estimated population approaching five million.

Located at the centre of Shewa region, the city stands at the very heart of Ethiopia and enjoys excellent connections with all of the country's economic zones. Addis Ababa is Africa's unchallenged diplomatic capital, with more than seventy- embassies and consular representatives clustered in the mountain city.

Historian Conti-Rossini once characterized Ethiopia as a 'rich cultural mosaic'. He could also have been speaking about Addis Ababa itself. Each of the country's multitude of ethnic groups is represented somewhere in the capital, as are a large number of foreign residents from all parts of the world who contribute to the city's cosmopolitan atmosphere.

There is much to do and see within the capital, whether at night – at the variety of nightclubs offering all manner of music from  traditional Ethiopian to modern pop, as well as dancing - or by day. The sports minded will probable already know of the country’s global reputation for producing first-class long distance runners, several of whom are world record holders. But those not anxious to try out their running shoes at this high altitude can still take advantage of the tennis - as well as open-air swimming in warm thermal water - offered by several top hotels. In addition, the Addis Ababa stadium offers frequent inter-African and other international as well as local football matches; and there are plenty of opportunities for horse-riding, bowls, and other sports.

The national language, Amharic – Africa’s only written language with its own uniquie script – is widely spoken throughout the country and is predominant in Addis Ababa. The principal foreign language are English, French, Italian, and Arabic.

The city is essentially divided into three main sections. To the east lies what may be termed the 'government and educational sector' where - running roughly from north to south - the university,  the National Museum, the old Menelik palace, the Palace, and Meskal (Revolution) Square are located.

The central sector is devoted largely to commerce but also houses some government businesses.This runs from SaintGeorges Cathedral and City Hall in the north to the railway station in the south - all byway of Churchill Road. Here too is the headquarters of the National and Commercial Banks; the main town sales office of Ethiopian Airlines; the Post, Telephone, and Telegraph Office; the main hospital; and the National Theatre.

Also much involved in trade is the western sector, where the famous and colourful Mercato - the largest open market in Africa - can be found, as well as the city's main mosque. The south-western sector, which developed later than the centre, is partly residential and partly industrial. It also houses an art museum displaying the works of Ethiopia's premier artist, Afewerk Tekle.

The south-west and south-east are also home to the majority of the embassies, clustered around the roads leading into the city from both the old (Lideta) and the new (Bole) airports.

Addis Ababa is the headquarters of the United Nations Economic Commission for Africa and the African Union. The fossilized skeleton, and a plaster replica of the early hominid Lucy (known in Ethiopia as Dinkinesh) is preserved at the Ethiopian National Museum in Addis Ababa. Meskel Square is one of the noted squares in the city and is the site for the annual Meskel at the end of September annually when thousands gather in celebration.

The city is home to the Ethiopian National Library, the Ethiopian Ethnological Museum (and former Guenete Leul Palace), the Addis Ababa Museum, the Ethiopian Natural History Museum, the Ethiopian Railway Museum and the National Postal Museum. Notable buildings include St George's Cathedral (founded in 1896 and also home to a museum), Holy Trinity Cathedral (once the largest Ethiopian Orthodox Cathedral and the location of Sylvia Pankhurst's tomb) as well as the burial place of Emperor Haile Selassie and the Imperial family, and those who fought the Italians during the war. There is also Menelik's old Imperial palace which remains the official seat of government, and the National Palace formerly known as the Jubilee Palace (built to mark Emperor Haile Selassie's Silver Jubilee in 1955) which is the residence of the President of Ethiopia.

Africa Hall is located across Menelik II avenue from the Palace and is where the United Nations Economic Commission for Africa is headquartered as well as most UN offices in Ethiopia. It is also the site of the founding of the Organisation of African Unity (OAU) which eventually became the African Union. The African Union is now housed in a new headquarters built on the site of the demolished Akaki prison, on land donated by Ethiopia for this purpose in the south western part of the city. The Hager Fikir Theatre, the oldest theatre in Ethiopia, is located at the Piazza district. Near Holy Trinity Cathedral is the art deco Parliament building, built during the reign of Emperor Haile Selassie, with its clock tower. It continues to serve as the seat of Parliament today. Across from the Parliament is the Shengo Hall, built by the Derg regime of Mengistu Haile Mariam as its new parliament hall. The Shengo Hall was the world's largest pre-fabricated building, which was constructed in Finland before being assembled in Addis Ababa. It is used for large meetings and conventions. 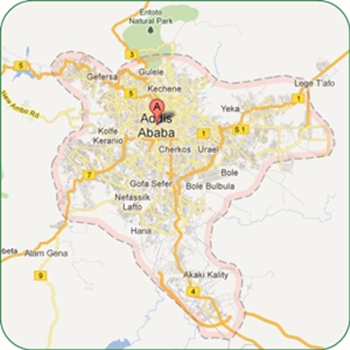 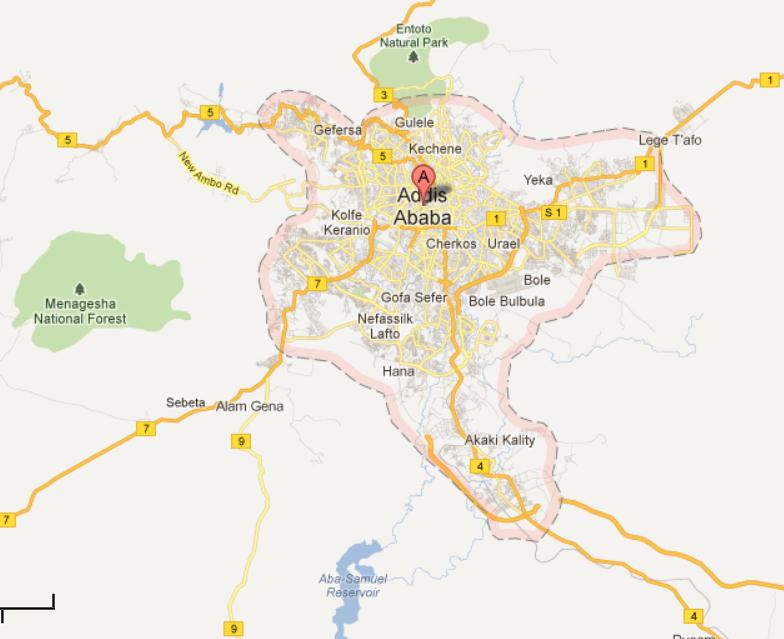 
In the Mercato district, which happens to be the largest open market in Africa, is the impressive The Grand Anwar Mosque, the biggest mosque in Ethiopia built during the Italian occupation. A few meters to the southwest of the Anwar Mosque is the Raguel Church built after the liberation by Empress Menen. The proximity of the mosque and the church has symbolized the long peaceful relations between Christianity and Islam in Ethiopia. The Roman Catholic Cathedral of the Holy Family is also in the Mercato district. Near Bole International Airport is the new Medhane Alem (Savior of the World) Orthodox Cathedral, which is the second largest in Africa.

Other features of the city include the large Mercato market, the Jan Meda racecourse, Bihere Tsige Recreation Centre and a railway line to Djibouti. Sport facilities include Addis Ababa and Nyala Stadiums. The 2008 African Championships in Athletics were held in Addis Ababa. The Entoto Mountains start among the northern suburbs. Suburbs of the city include Shiro Meda and Entoto in the north, Urael and Bole (home to Bole International Airport) in the east, Nifas Silk in the south-east, Mekanisa in the south, and Keraniyo and Kolfe in the west.

The city hosts the "We Are the Future" center, a child care center that provides children with a higher standard of living. The center is managed under the direction of the mayor's office, and the international NGO Glocal Forum serves as the fundraiser and program planner and coordinator for the WAF child center in each city. Each WAF city is linked to several peer cities and public and private partners to create a unique international coalition. Launched in 2004, the program is the result of a strategic partnership between the Glocal Forum, the Quincy Jones Listen Up Foundation and Mr. Hani Masri, with the support of the World Bank, UN agencies and major companies.