The Story About Ethiopia, The Nile, and The Renaissance Dam

The Nile flows from south to north over 6,695km from its first tributary - the Ruvyironza River in Burundi - before emptying into the Mediterranean Sea. The Nile Basin, which is a network of connected ecosystems, spans 11 countries: Burundi, Rwanda, Tanzania, Kenya, the Democratic Republic of the Congo, Uganda, Ethiopia, Eritrea, South Sudan, Sudan and Egypt.

The river consists of two main tributaries known as the White Nile and the Blue Nile. These rivers meet at the Sudanese capital, Khartoum. From there, the unified river is joined by the Atbarah River before reaching Egypt in the north.

Scientists believe the Nile to be between 20 and 30 million years old. In its current form, it is considered the oldest and longest river on the planet. It contains more than 100 islands, Egypt being home to 22 of them. The construction of dams on the Nile, including the Renaissance Dam, is expected to severely impact the biodiversity of these islands and the people who rely on them.

Although the river is long, compared to other major rivers it is considered very slow. It is estimated to take up to three months for water to flow from Lake Victoria in the south to the Mediterranean Sea in the north.

The Nile is the only river that crosses through five distinct climate zones. The map shows how the river crosses from a tropical rainy climate to a semi-tropical one, then on to a semi-arid climate before the arid Sahara Desert and finally into the Mediterranean. 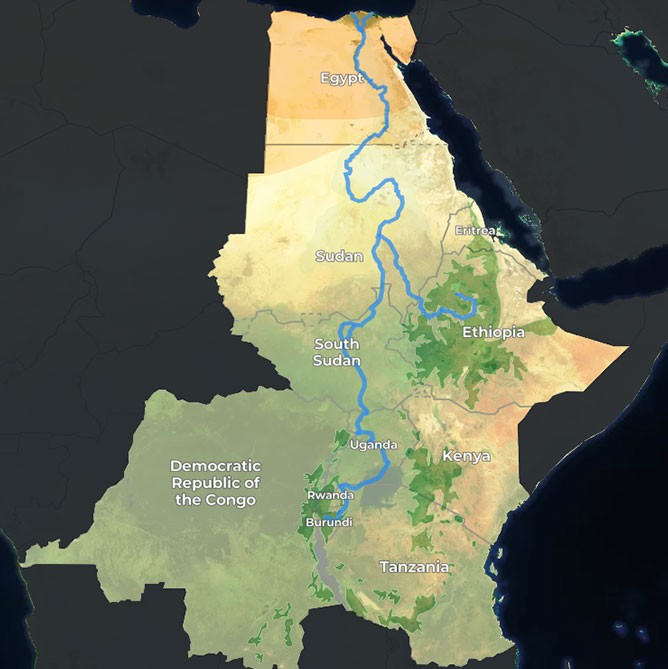 In 1929, Egypt and Britain signed the Nile Waters Agreement. Britain signed as a representative of Uganda, Kenya, Tanganyika (now Tanzania) and Sudan. The document recognised Egypt’s right to the waters of the Nile as well as the right to veto any irrigation projects that would affect its share of the river's water.

In 1959, Egypt and Sudan signed another accord that supplemented the previous agreement. It gave Egypt the right to an annual share of 55.5 billion cubic metres (66%) and Sudan 18.5bn cubic metres (22%). Ethiopia was not consulted. The remaining 12 percent of the river's 84 billion cubic metre annual water supply is lost to evaporation. Britain benefitted from the agreement as it was, at the time, taking advantage of Egypt's water-intensive crops, including cotton. 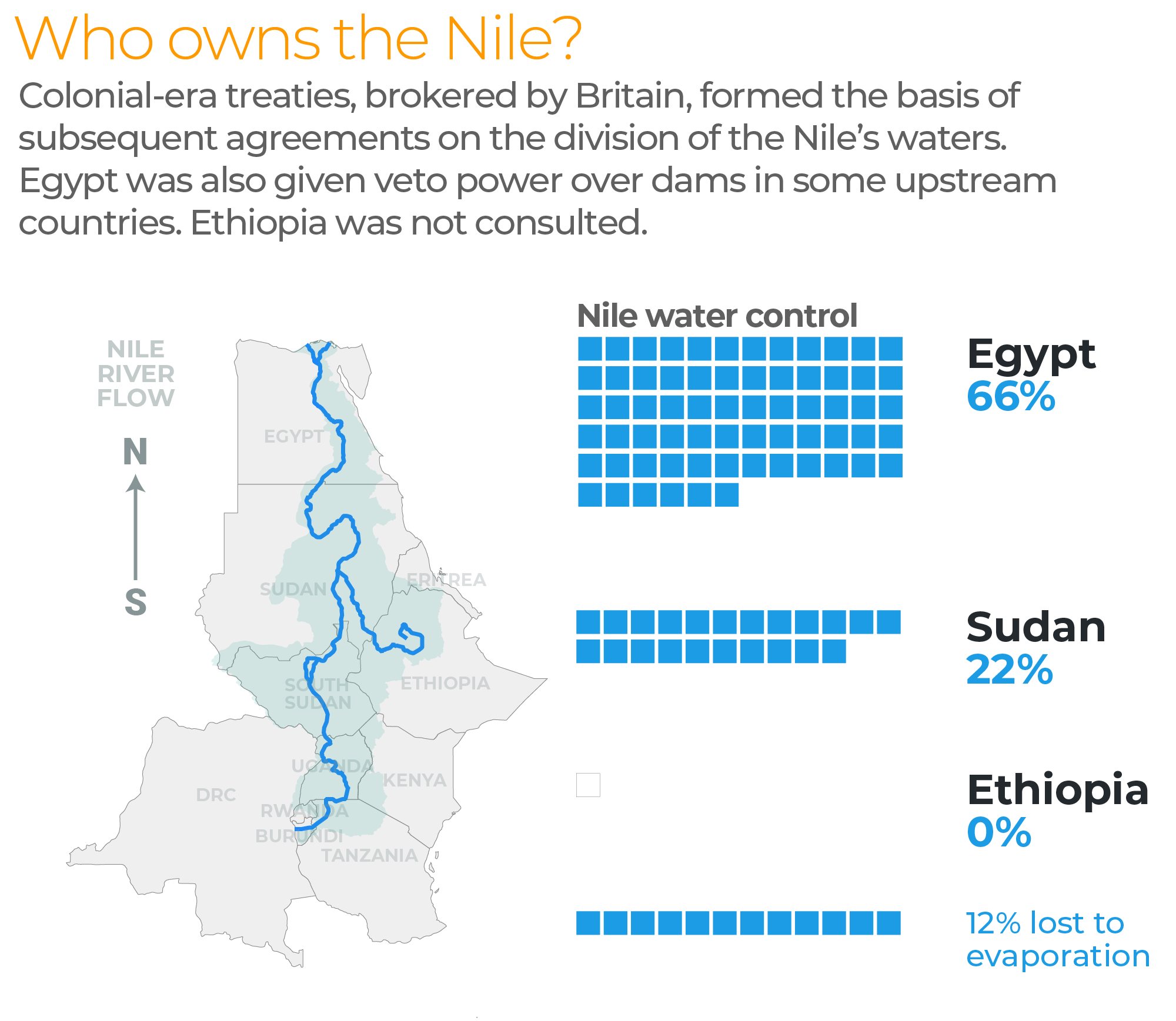 The Nile Basin is shared by 280 million people across 11 countries. The basin is one of the largest in the world, covering approximately 10% of the entire African continent.

Despite this, many countries in the region face a water deficit. Growing populations, economic development and climate change have placed additional strains on water resources.

The infographic below highlights the number of people who live in the Nile Basin as a ratio of each country's population. 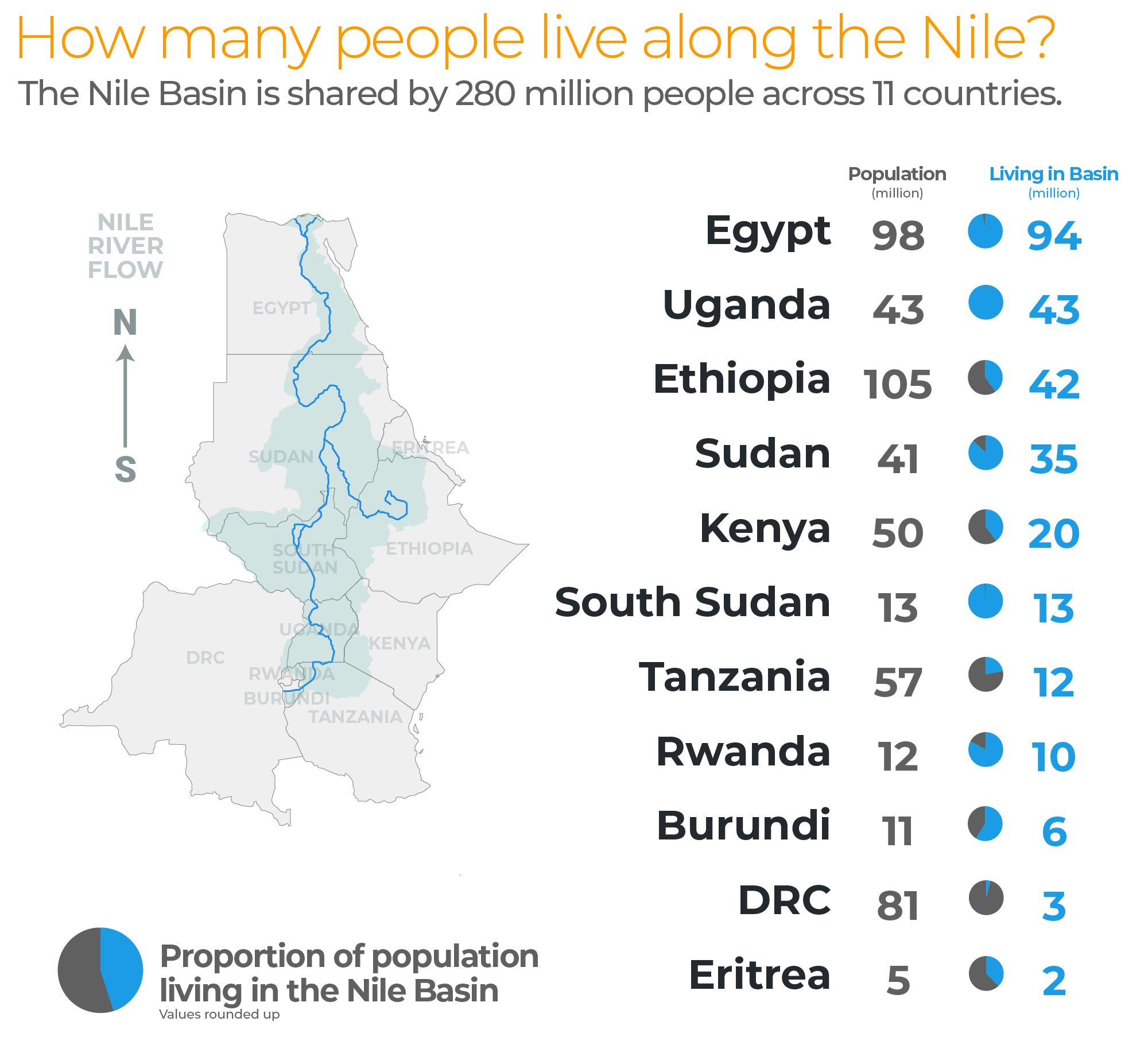 ETHIOPIA - The Source of the Blue Nile

Lake Tana is the main reservoir of the Blue Nile, providing over 80 percent of the river’s water. It is located 1,788 metres above sea level in the northwestern Ethiopian Highlands. Lake Tana is Ethiopia's largest lake (the third-largest in the Nile Basin) and contains half the country’s fresh water resources. Seven large permanent rivers, as well as about 40 smaller seasonal rivers, feed the lake.

Ethiopia began construction of the Renaissance Dam in April 2011. The twin-reservoir dam is in the Benishangul-Gumuz region, just 30km from the Sudanese border. Once complete, the primary dam will span an area of 1,780sq kilometres and will store approximately 15 billion cubic metres of water behind its 155 metre-high wall.

The second auxiliary dam is a rock and concrete reservoir, measuring 4,800 metres in length and 55 metres in height. It will store approximately 60 billion cubic metres of water and will help divert any excess water from the primary reservoir back along the course of the Nile. The dam has a combined capacity of almost 75 billion cubic metres. 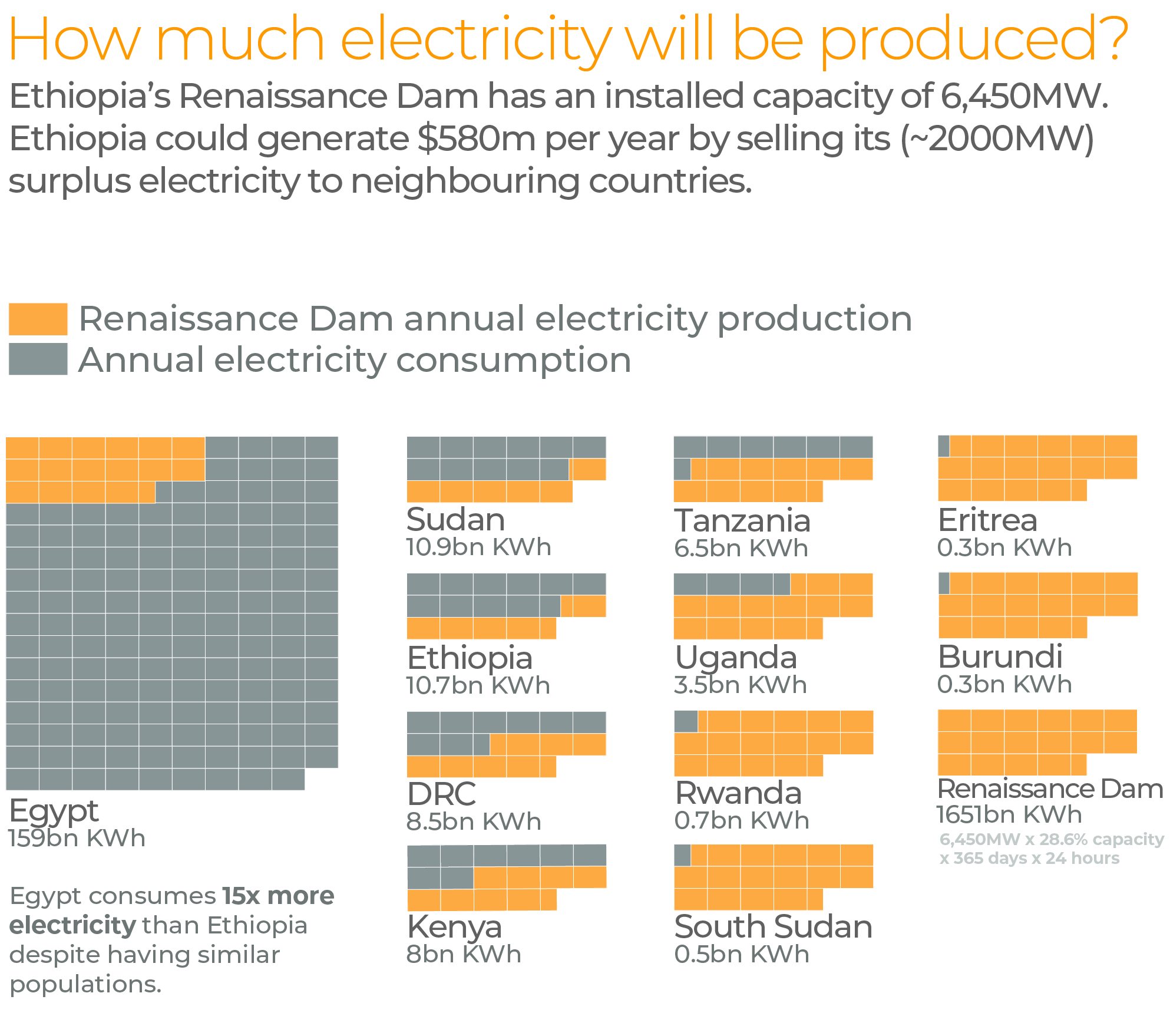 Here is how Ethiopia's Renaissance Dam stacks up against Egypt's Aswan High Dam, as well as a breakdown of how much electricity it is expected to produce. 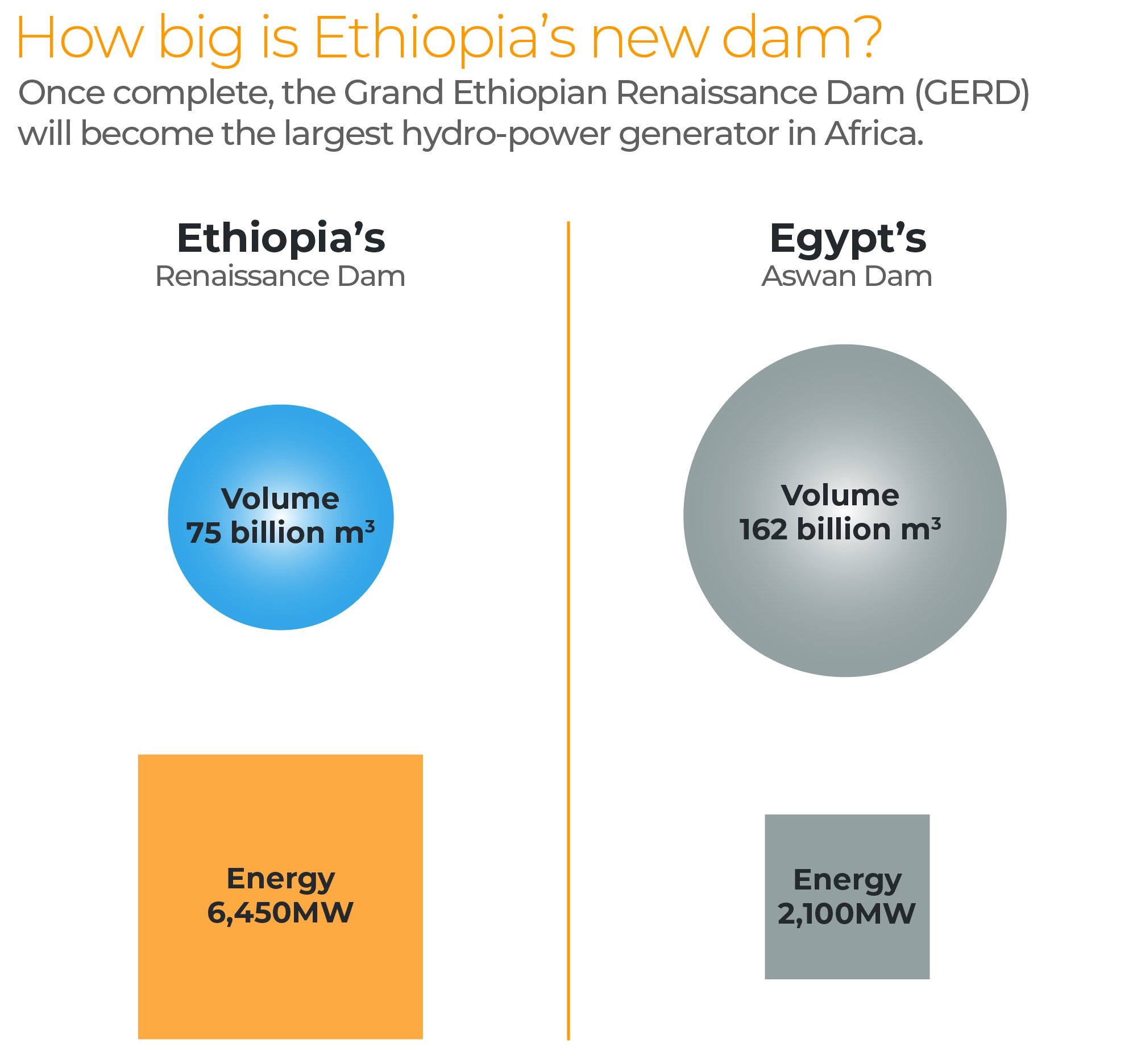 On November 13, 2019, Ethiopia announced that it had completed construction of the auxiliary dam. The main dam is expected to be completed in early 2023 but will begin filling in the summer of 2020.

Ethiopia is counting on the Renaissance Dam to meet its growing energy and development needs. The Ethiopian government is planning to build a new commercial network in surrounding areas, which it says will lead to employment opportunities. Once the dam is complete, Ethiopia will become Africa's largest energy exporter, and sell about 2,000MW of surplus electricity from the dam to neighbouring countries.

Ethiopia refuses to acknowledge colonial-era Nile Water Agreements and wants the dam to be filled in three to five years. It believes the 40 billion cubic metres of dam water that Egypt says it needs annually will hinder its ability to fill the dam in time to produce much-needed electricity. Ethiopia is one of the cleanest energy producers on the African continent. 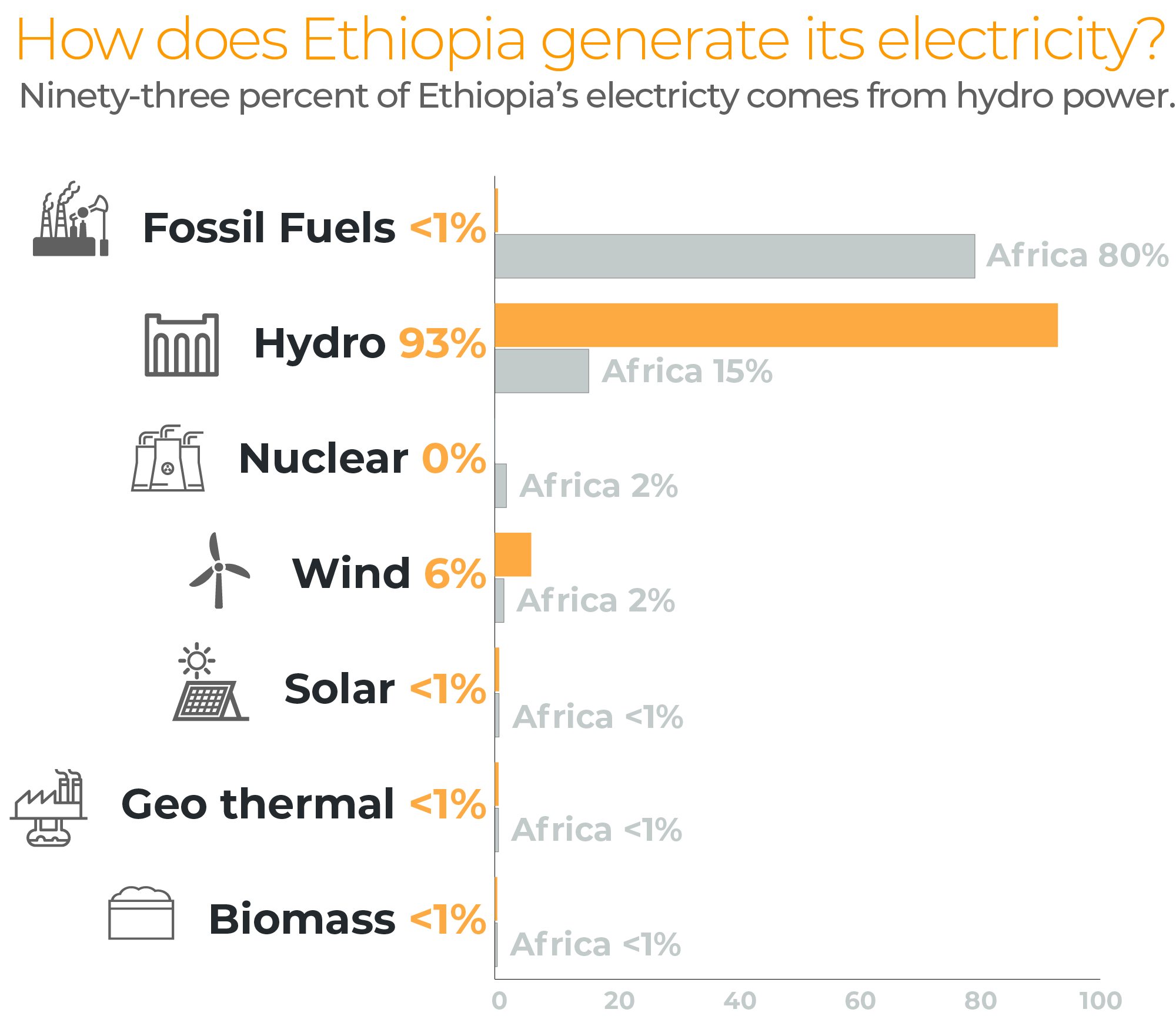 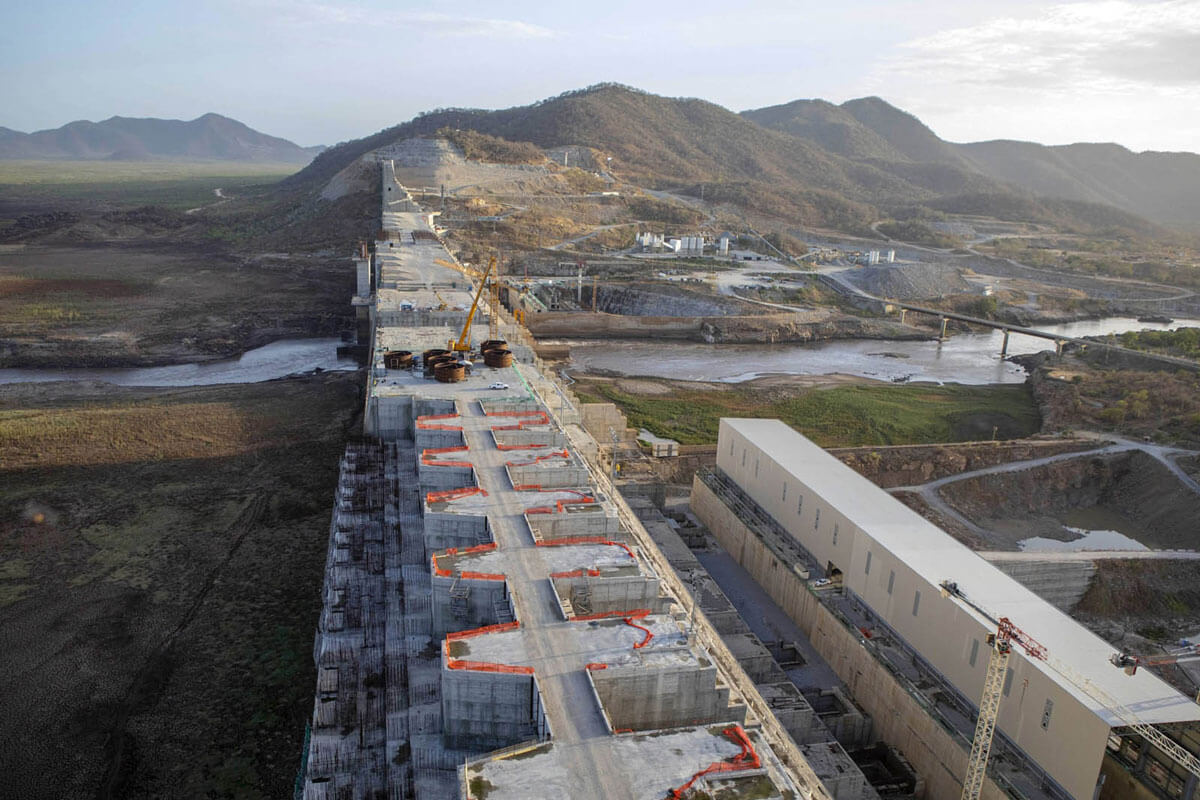