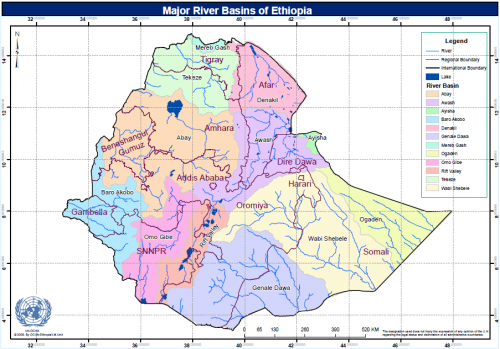 Ethiopia has nine major rivers and twelve big lakes. Lake Tana, for example, in the north is the source of the Blue Nile. However, apart from the big rivers and major tributaries, there is hardly any perennial flow in areas below 1,500 m. While the country’s annual renewable freshwater potential is 122 billion m3, only 3 percent of this amount remains in the country. It is estimated that 54.4 billion m3 of surface runoff and 2.6 billion m3 of groundwater can be developed for utilization. Currently less than 5 percent of surface water potential is used for consumptive purposes.

Blue Nile makes about 80% by volume of the Great Nile River. The Blue Nile from Ethiopia originating form Lake Tana and the White Nile that originated form Lake Victoria merge into the Great Nile River at Khartoum, the Sudan capital to form the longest river of the world draining to the Mediterranean Sea.The Blue Nile Falls is one of the most popular tourist destination sites along the historic route. The Blue Nile Falls is situated near Tis-Abay town, 30 kms to the east of Bahir Dar, which is 20-30 minutes walk from the little town of Tiss Abey.

The Blue Nile flows generally south from Lake Tana and then west across Ethiopia and northwest into Sudan. Within 30 kilometres (19 mi) of its source at Lake Tana, the river enters a canyon about 400 kilometres (250 mi) long. This gorge is a tremendous obstacle for travel and communication from the north half of Ethiopia to the southern half. The power of the Blue Nile may best be appreciated at Tis Issat Falls, which are 45 metres (148 ft) high, located about 40 kilometres (25 mi) downstream of Lake Tana.

The distance from its source to its confluence is variously reported as 1,460 and 1,600 kilometres (907 and 1,000 miles). The uncertainty over its length might partially result from the fact that it flows through a series of virtually impenetrable gorges cut in the Ethiopian Highlands to a depth of some 1,500 metres (4,900 ft) - a depth comparable to that of the Grand Canyon of the Colorado River in the United States.

Although there are several feeder streams that flow into Lake Tana, the sacred source of the river is generally considered to be a small spring at Gish Abbai, situated at an altitude of approximately 2,744 metres (9,003 ft). This stream, known as the Lesser Abay, flows north into Lake Tana. Other affluents of this lake include, in clockwise order from Gorgora, the Magech, the Northern Gumara, the Reb, the Southern Gumara and the Kilte. Lake Tana's outflow then flows some 30 kilometres before plunging over the Tis Issat Falls. The river then loops across northwest Ethiopia through a series of deep valleys and canyons into Sudan, by which point it is only known as the Blue Nile.

The Omo River tumbles its 350 -kilometer way through a steep inaccessible valley before slowing its pace as it nears the lowlands and then meanders through flat, semi-desert bush eventually running into Lake Turkana. Since 1973, the river has proved a major attraction for white-water rafters. The river passes varied scenery, including an open gallery forest of tamarinds and figs, alive with colobus monkeys. Under the canopy along the riverbanks may be seen many colorful birds. Goliath herons, blue breasted kingfishers, white-cheeked turacos, emerald-spotted wood doves and red-fronted bee-eaters are all rewarding sights while monitor lizards may glimpse scuttling into the undergrowth. Beyond the forest, hippos graze on the savannah slopes against the mountain walls, and waterbuck, bushbuck and Abyssinian ground hornbills are sometimes to be seen.

The Baro River is a river in southwestern Ethiopia, which defines part of Ethiopia's border with South Sudan. The Baro river is created by the confluence of the Birbir and Gebba Rivers, east of Metu in the Illubabor Zone of the Oromia Region. From its source in the Ethiopian Highlands it flows west for 306 kilometres (190 mi) to join the Pibor River. The Baro-Pibor confluence marks the beginning of the Sobat River, a tributary of the White Nile.

The only navigable river in Ethiopia. The Baro River area, accessibly by land or air through the western Ethiopia town of Gambela, remains a place of adventure and challenge. 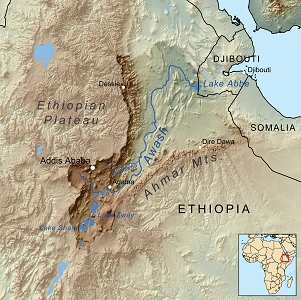 The Awash River is a major river of Ethiopia. Its course is entirely contained within the boundaries of Ethiopia, and empties into a chain of interconnected lakes that begin with Lake Gargori and end with Lake Abbe on the border with Djibouti, some 100 kilometers (60 or 70 miles) from the head of the Gulf of Tadjoura. It is the principal stream of an endorheic drainage basin covering parts of the Amhara, Oromia and Somali Regions, as well as the southern half of the Afar Region.

The Awash rises south of Mount Warqe, west of Addis Ababa in the woreda of Dandi, close to the town of Ginchi, Mirab (West) Shewa Zone, Oromia. Thence the Awash flows south to loop around Mount Zuqualla in an easterly then northeasterly direction, passing the Awash National Park, and joined on its left bank by its chief affluent, the Germama (or Kasam) River, before turning completely east to reach lake Gargori.

According to materials published by the Ethiopian Central Statistical Agency, the Awash River is 1200 kilometers long.

The Tekeze River, is a major river of Ethiopia. For part of its course it forms a section the westernmost border of Ethiopia and Eritrea. The river is also known as the Setit in Eritrea, western Ethiopia, and eastern Sudan. According to materials published by the Ethiopian Central Statistical Agency, the Tekezé River is 608 kilometers (378 mi) long. The canyon which it has created is the deepest in Africa and one of the deepest in the world, at some points having a depth of over 2000 meters (6,562 feet).

The Tekeze River rises in the central Ethiopian Highlands near Mount Qachen within Lasta, from where it flows west, north, then west again, forming the westernmost border of Ethiopia and Eritrea from the confluence of the Tomsa with the Tekeze to the tri-point between the two countries and Sudan. After entering northeastern Sudan, the Tekeze joins the Atbarah River, the lower course of which is a tributary of the Nile. The Tekeze is perhaps the true upper course of the Atbarah, as the former follows the longer course prior to the confluence of the two rivers. 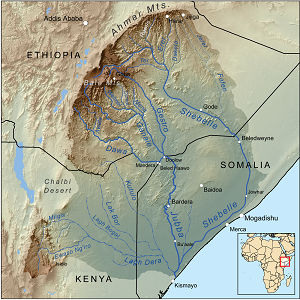 The Shebelle River, also known as Webi Shabeelle river, begins in the highlands of Ethiopia, and then flows southeast into Somalia towards Mogadishu. Near Mogadishu, it turns sharply southwest, where it follows the coast. Below Mogadishu, the river becomes seasonal. During most years, the river dries up near the mouth of the Jubba River, while in seasons of heavy rainfall, the river actually reaches the Jubba and thus the Indian Ocean.

The Shebelle river is 1130 kilometers long, extending for 1000 km inside Ethiopia and 130 km inside Somalia.

The Angereb also known as the Bahr as-Salam is a river of Ethiopia and eastern Sudan, and one of the sources of the Nile. It rises near Daqwa, north of Gondar in the Amhara Region, flowing west to join the Atbarah River.

The Mereb River (or Gash River), is a river flowing out of central Eritrea. Its chief importance is defining part of the boundary between Eritrea and Ethiopia. the Mereb River is 440 kilometres (270 mi) long. The Ethiopian Ministry of Water Resources reports its Ethiopian catchment area as 5,700 square kilometres (2,200 sq mi), with an annual runoff of 0.26 billion cubic meters. Other sources talking about a catchmant of 21,000 square kilometres (8,100 sq mi) to 44,000 square kilometres (17,000 sq mi) over all, and a discharge of 21.6 cubic metres per second (760 cu ft/s) in average over the year, and 870 cubic metres per second (31,000 cu ft/s) in peaks. Its headwaters rise south-west of Asmara in central Eritrea. It flows south, bordering Ethiopia, then west through western Eritrea to reach the Sudanese plains near Kassala. Unlike the Setit or Takazze rivers, which flow out of Ethiopia and also forms a natural border with Eritrea, the waters of the Mareb do usually not reach the Nile but dissipate in the sands of the eastern Sudanese plains.

The Mareb is dry for much of the year, but like the Takazze is subject to sudden floods during the rainy season; only the left bank of the upper course of the Mareb is in Ethiopian territory. Its main tributaries are the Obel River on the right bank (in Eritrea) and the Sarana, Balasa, Mai Shawesh, and 'Engweya Rivers on the left (in Ethiopia).